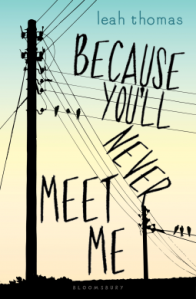 In a stunning literary debut, two boys on opposite ends of the world begin an unlikely friendship that will change their lives forever.

Ollie and Moritz are best friends, but they can never meet. Ollie is allergic to electricity. Contact with it causes debilitating seizures. Moritz’s weak heart is kept pumping by an electronic pacemaker. If they ever did meet, Ollie would seize. But Moritz would die without his pacemaker. Both hermits from society, the boys develop a fierce bond through letters that become a lifeline during dark times—as Ollie loses his only friend, Liz, to the normalcy of high school and Moritz deals with a bully set on destroying him.

A story of impossible friendship and hope under strange circumstances, this debut is powerful, dark and humorous in equal measure. These extraordinary voices bring readers into the hearts and minds of two special boys who, like many teens, are just waiting for their moment to shine.

Disclaimer: This ARC was provided by Bloomsbury Publishing Plc (UK & ANZ) via Netgalley in exchange for an honest review.

It was refreshing to read something featuring characters with voices that made them feel so real to me. Each chapter of the book was a letter from either Ollie or Moritz. They would describe their past and present and often banter with each other. I loved it. I absolutely loved it.

Both of the characters are struggling with a kind-of disability that prevents them from “fitting in” with “normal” people. Ollie is allergic to electricity and Moritz has a pacemaker. They’re the opposite of each other in almost every way. Ollie is loud and cheerful and extroverted in his letters while Moritz is a bit more hesitant and eloquent. But the fact that by society’s standards they aren’t normal, is what brings them together.

I don’t think I could have picked a favorite! I loved Ollie because he chose to live in the best ways he knew. Despite having seizures when he came in contact with electricity, he still did the craziest things like running at a powerline. Moritz was equally fascinating because he didn’t have eyes but could see the world around him using echolocation. I felt for him more than Ollie because while Moritz had the opportunity to go to school and experience things Ollie might never get to, Moritz also had to deal with bullies and classmates who avoided him because of how he looked.

So while this book initially seemed to be a contemporary, it did contain some sci-fi elements (like the narrators’ strange conditions). I was okay with that. In fact it intrigued me and I felt like it made the premise even more unique and different. But what I do feel the need to point out is that this book isn’t a 100% realistic contemporary.

The best part about this book would probably be the characters. They took this book to the next level and if you like me, are all about the characters then read this. Fyi, I think the plot is great but not amazing so if you’re looking for something with more action in it, then this isn’t the book for you.

3 thoughts on “ARC Review: Because You’ll Never Meet Me by Leah Thomas”