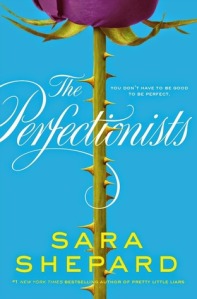 From the author of the #1 New York Times bestselling series Pretty Little Liars comes a thrilling new novel about five perfect girls who are framed for a murder they didn’t commit.

In Beacon Heights, Washington, five girls—Ava, Caitlin, Mackenzie, Julie, and Parker—know that you don’t have to be good to be perfect. At first the girls think they have nothing in common, until they realize that they all hate Nolan Hotchkiss, who’s done terrible things to each of them. They come up with the perfect way to kill him—a hypothetical murder, of course. It’s just a joke…until Nolan turns up dead, in exactly the way they planned. Only, they didn’t do it. And unless they find the real killer, their perfect lives will come crashing down around them.

From Sara Shepard, author of the #1 New York Times bestselling Pretty Little Liars series, comes another story of dark secrets, shocking twists, and what happens when five beautiful girls will do anything to hide the ugly truth.

I haven’t read Pretty Little Liars so unlike many people who read and/or reviewed this book, I was reading a novel by Sara Shepard for the first time and I wasn’t disappointed.

The five protagonists live in a town where everyone is outwardly perfect in every way possible (looks, school, etc.). The only problem is that everyone also has at least one “dirty secret” and Nolan Hotchkiss is the boy who knows too many of them. Ava, Caitlin, Mackenzie, Julie and Parker discuss the perfect way to kill him (they’re just joking of course) but then he ends up dead..exactly as they planned.

As the chapters progress, the author continues to reveal secrets about the five MC’s. All of the secrets make total sense while also being 100% unexpected. Between the secrets and the mystery, I was addicted. (I finished the entire book on the plane – something I usually find hard because I feel kind of sleep deprived while traveling.) There are tons of side plots and they have everything from backstabbing and betrayal to rumours, stalking, girls sleeping with their teacher. I know..It’s crazy intense!

My favorite part of the book were the characters and hence, the multiple POVs. Every character is flawed in some way but some were obviously more interesting than others. Parker, for example, was both outwardly and inwardly scarred. However, her and Julie’s positive friendship was kind of a relief at times because there was so much betrayal going around. And at first, I thought Ava would be the only one who isn’t flawed but then we find out about her bitchy stepmother. Even poor Julie has to endure life in a cat-infested home, constantly berated by her mother. Out of the five, I felt that Mackenzie was the most driven. She was musically talented and wanted to get into Juilliard.

I know a lot of people have said this book is rather similar to Pretty Little Liars – plot-wise and character-wise but if you’re like me and you want to read a book with drama and strong female characters, check it out. I think you might find yourself enjoying it despite the similarities.