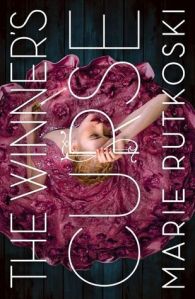 Winning what you want may cost you everything you love.

As a general’s daughter in a vast empire that revels in war and enslaves those it conquers, seventeen-year-old Kestrel has two choices: she can join the military or get married. But Kestrel has other intentions. One day, she is startled to find a kindred spirit in a young slave up for auction.

Arin’s eyes seem to defy everything and everyone. Following her instinct, Kestrel buys him—with unexpected consequences. It’s not long before she has to hide her growing love for Arin. But he, too, has a secret, and Kestrel quickly learns that the price she paid for a fellow human is much higher than she ever could have imagined.

Set in a richly imagined new world, The Winner’s Curse by Marie Rutkoski is a story of deadly games where everything is at stake, and the gamble is whether you will keep your head or lose your heart.

The world-building in this book is fabulous and whenever I started reading this book, I’d instantly be transported into Valorian society. Like the real world, there are so many nuances to the various social situations Kestrel is placed in. An action can be interpreted multiple ways and truth, lies, and rumours are employed to effectively blackmail people. Throughout the book, we slowly get a feel for what is considered taboo and what isn’t. Kestrel’s perceptive nature also helps her to untangle the truth from the lies. For example, even though Kestrel is the daughter of a general – she isn’t permitted to leave her home without an escort and when she always leaves with the same escort…people start paying more attention to her “odd behavior.”

The story of the Herrani and Valorians is also dangerously similar to that of many ancient civilizations. But by telling the story from the point of view of characters who are Herrani (slaves/victims) and Valorians (invaders), the author doesn’t lean toward one side or the other. In fact, both Kestrel and Arin acknowledge the mistakes of their peers while still maintaining their loyalty to their people.

Reading this book was intoxicating. Between the writing style, rich descriptions, and amazing characters, I couldn’t get enough of this book. The forbidden romance in this book is unlike anything I’ve read before. The (sexual) tension slowly builds between the main characters but isn’t cliche or obvious. Their relationship has this unpredictable quality to it and they don’t just fall in love overnight. Their romance also never takes the spotlight unlike in many other complex high-stakes fantasy books. Instead the author addresses issues like morality, loyalty, slavery and war through the character. Both Kestrel and Arin have responsibilities but instead of shying away from them, they face them head-on even as they wrestle with their feelings for each other.

Interestingly enough, Kestrel’s father isn’t portrayed as the villain or resented for being one of the high ranking officer’s who laid waste to Herran. Instead he’s a complex, flawed character who is merely following orders and trying to ensure that his people survive and thrive. Even Kestrel who is constantly pressured by him to enlist or marry, doesn’t resent him for treating her that way. Kestrel’s father never alienates her and his actions often show that he truly cares about her wellbeing even if he refuses to acknowledge her feelings

Kestrel is incredibly brave and witty but what makes her unique is that she’s physically weak. Unlike most protagonists in YA, she’s not a good fighter but her strength is her tactical mind which allows her to analyze situations to gain the upperhand. She’s quick to strategize her way out of sticky situations and always takes into account her shortcomings.

Arin is also unlike the classic swoon-worthy protagonists found in YA. There is more emphasis placed on his rich personality than on his looks which means we see him as more than man-candy. One of his strengths is his patience but at the same time, he’s very driven and proud. He’s cunning, smart and also a strategist who drives a hard bargain with what he has.

Other things I loved about this book include:
– The music which is used to set the mood and drive the story forward.
– The Bite and Sting games in which Kestrel and Arin eventually gamble with questions and answers instead of wealth (or matchsticks). (At this point, truth suddenly becomes a precious commodity which is worth gambling for and no matter who wins, both of them come to know each other better.)
– The book’s hybrid nature – it merges Historical Fiction and Fantasy perectly.
– The irony in how Valorian woman are often trained fighters but aren’t allowed to wander without an escort.
– The politics (intrigue) and power struggles which are often the focus of this book. (Neither Kestrel nor Arin gain the upperhand for long at any one time and it’s nice to read about characters who are so evenly matched.)

Update:  After reading some recent reviews, I have become aware of some of the problematic aspects of this book – for example, the romanticisation of the slave trade. To read a review that addresses this issue in more depth, click here. I’m sorry I didn’t notice and/or address this aspect of the book in the original review.

7 thoughts on “Book Review: The Winner’s Curse by Marie Rutkoski”

Hello, I’m Rachana and it’s lovely to meet you. I’m an writer, poet, and blogger. My poetry has appeared in DIALOGIST, diode poetry journal, and The Blueshift Journal. On this blog, you can find book reviews and recommendations alongside poetry and reflections.