Warning: There are minor spoilers revealed.

I kept expecting more from Illusions of Fate. I felt like it didn’t deliver on it’s promise of being a “lush romantic fantasy” and it was nothing like Cassandra Clare’s books (which I’ve read and loved). Jessamin is a very witty character but she is constantly compared to the “other women” of Albion which I found annoying. The author seems to be trying too hard to emphasize the fact that Jessamin is “different” from the people around her..And that’s great but it’s not like the character has to stand out and be “special” or “different.” Finn, the love interest, is charming but the author ruins it by revealing that he uses magic to charm people which makes him seem manipulative. The romance is a slow burn but it’s not satisfying and when they do finally get together, I felt like they lacked chemistry. I also couldn’t get over the fact that Finn uses his magic on her. She forgives him far too quickly and easily despite all her sass regarding other things.

The ending is also too perfect. I’m not against happy endings but it was unrealistic how everything suddenly went so well at the end, considering how the first half of the book was so suspenseful. There is this massive plot twist at the end but the showdown I’d been expecting ends pretty quickly and isn’t that dramatic. While Illusions of Fate wasn’t quite what I expected, there was great prose. 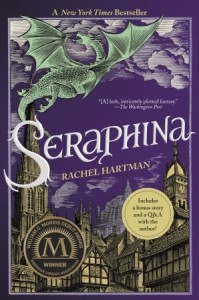 This book is incredible you guys.  There is brilliant world-building, politics, dragons (that are freaking awesome), and a talented musician who is struggling with a secret. There are very few “dragon” books that are unique and original and Seraphina is definitely one of them. The story is very rich and I could practically taste the words I read. There are also tons of characters but all of them are well-developed and by the end of the book, they felt so real to me – I could almost imagine having a cup of coffee with Seraphina’s uncle. To top it all off, Seraphina makes for a great female lead. She doesn’t go around making stupid decisions and she’s not only pragmatic but also thoughtful and compassionate.

At 500 pages, Seraphina is one long book but I never felt bored (I can have a short attention span when it comes to long books.) In fact, I felt compelled to pick up the next book, immediately after finishing it.