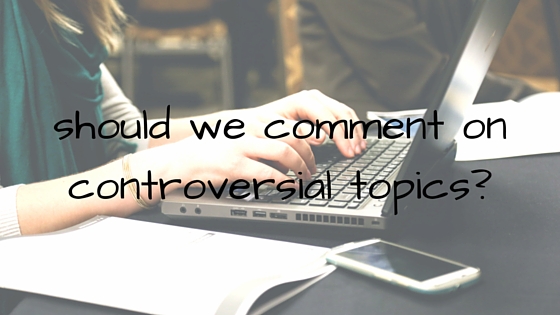 So last week, there was a a bit of drama in the blogosphere. I was only a witness (but I did comment on the post that started it all and agreed with a lot of the points that it made). However, I later read a couple of other posts pointing out the problematic aspects of that original post and I realized that while that post made some good points, it was also a bit negative and seemed to judge other bloggers.

While this community is, as I like to put it, fucking awesome, that post and the drama that happened inspired me to brainstorm some pros and cons to commenting on controversial topics.

Pros of Speaking Up

Cons of Speaking up!

To me, the number of pros and cons is more or less the same. However, I think it’s also important to keep in mind that intent can also determine the reaction. If someone is just trying to start a conversation or remind people to be more open-minded, their words are less likely to be received negatively.

So what are your thoughts? Are there any pros or cons I missed? Do you agree with me? Disagree? And are you the kind of person who likes to get involved or watch from the sidelines? 😉